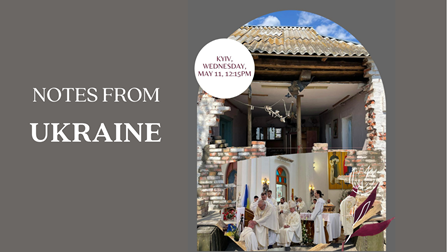 Dear sisters, dear brothers As I’m walking through springtime Kyiv, it feels like the war has just ended. Each day, the streets are filling with a growing number of people; new stores are opening up; new coffee shops, restaurants, and services are unlocking their doors. Even the bazaar, not far from our priory, is seeing merchants returning, although until recently it was just a mess of a place, since the adjacent building was destroyed two months ago by Russian rockets. It’s not particularly unusual. Since the beginning of war, 390 buildings in the capital, including 222 apartment buildings, have been damaged or destroyed; 75 schools, pre-K, and kindergarten buildings suffered damage, as well as 17 hospitals and healthcare facilities. Of course, if we compare them with Kharkiv, a great metropolis in eastern Ukraine, the numbers don’t seem so high; but every one of these places signifies real human tragedies, very often death and maiming of innocent people, and many resources that will be needed to rebuild them. There are still fewer cars in Kyiv than there had been before the war. It’s not surprising, since many of the capital’s citizens haven’t returned to their homes yet. There are also big challenges in acquiring fuel. Recently I pulled over with a couple brothers at one of the gas stations. We misunderstood the sign on the electronic board about the prices, and as we approached the cashier, I heard: “The fuel is only for those who have special coupons.” I was just
Read More