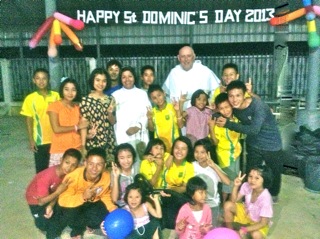 Don Matthews has been the key person in Auckland raising awareness and money for the Mae Sot Orphanage on the Thai/Burma border.  The orphanage is led by two Dominican Sisters (Sr Josephine and Sr Marcello).  The Orphanage was originally funded by benefactors from Spain who also purchased a substantial block of land so there is room for further expansion.  Fr Alex Vickers (now in Adelaide) has been a regular supporter of the Orphanage.  He knows many of the children by name and is pretty fluent in Thai.  He is regarded by the Sisters as their own personal Chaplain and by the children as their real father!  Parishioners in his community in Adelaide regularly provide substantial funding for major projects at Mae Sot.

The children are all Burmese and many have been orphaned whilst other children have one parent still in Myanmar and have been smuggled out of the country  for safety reasons.  In addition to helping the children who live at the orphanage the community provides outreach into the wider refugee community.  One day they prepared a Thai Green Curry in the Orphanage Kitchen.  This was distributed to 130 starving children in the slums.
In Auckland St Dominic’s School has been supporting the Orphanage.  Last year they collected footwear which was sent to the Orphanage and Auckland students wrote letters to individual orphans.  The letters included a photo of the children in Auckland.  The reaction of the orphans when Fr Alex handed out these letters was incredible.
The focus right now is to raise money for a well which will provide clean drinking water for the orphanage and for the refugees who live in a rubbish dump.  Rotary have promised $7000 of the $10000 needed.  The challenge is to see if we can raise the $3,000 balance through our Dominican family in New Zealand.   Blockhouse Bay Parish are starting with a fundraiser this weekend.  If you can help please contact Don Matthews on donaldmatthews510@gmail.com.   For more information about the orphanage please go to http://www.holyinfantorphanage.org
Photos below are of a Sister inspecting the area where the well is to be installed and Sr Marcella distributing food to the hungry children.