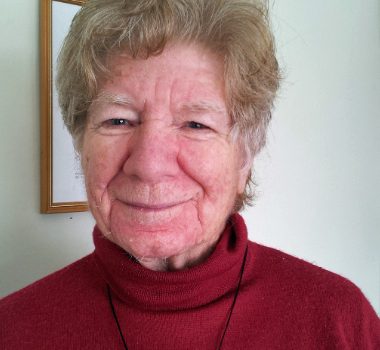 Mary was born in Dunedin the eldest of four children and was profoundly deaf.

In 1946, at the age of seven she left her family to board at St Dominic’s School for Deaf Children in Island Bay, Wellington and Aorangi, Feilding when the school relocated there.  This was a very happy time for her. She considered the school for the deaf her first home, her classmates her brothers and sisters, and her own family her second home.

When Mary left school in 1956 she returned to Dunedin wanting to train to be a teacher. She was refused by the Otago  Education Board (because of her deafness) and, as she didn’t want to work in an office, she worked as a book-binder for 50 years, all the while helping the deaf community to communicate.   She went to Australia for her OE and, despite not having School Certificate or references, found lots of work.  She really enjoyed her time there, meeting many people and helping the Deaf community.  She returned to Auckland, settling in Blockhouse Bay and has been a member of St Dominic’s  Parish for the last 28 years. Although she has no family in Auckland, they live mainly in the South Island, Mary is happy here, enjoying the sunshine and having plenty of friends around her.

Mary has helped deaf people all over Auckland, working as a volunteer pastoral worker for the Auckland Catholic Diocese, visiting the deaf in their homes, rest homes and hospitals and assisting as a translator. Mary has a great interest in the New Zealand Sign Language Tutor Association and for  12 years taught sign language to people of all ages, but has now retired. She has also been involved with the Mount Tabor Trust helping the deaf and disabled people there. In 2012 Mary received the MNZM (Member of the New Zealand Order of Merit) for her services over many years to the Deaf Community.

Mary  received a deep grounding in her faith from the Dominican Sisters and from her family for which she is very thankful.  She is a member of the Dominican laity and  has a very strong Catholic faith which helps her as she believes that it is important for the deaf to have a sense of belonging. Life for a deaf person is hard with a lot to fear so having faith helps you to be open and more confident rather than standing back and worrying that something will happen.

There are about 3000 deaf people in New Zealand and 1000 Deaf Catholics in the Auckland Diocese. Masses for the Deaf are celebrated at Pompallier Centre every second Sunday a month. Twice a year a Mass for the Deaf is celebrated here at St Dominic’s, the most recent on the 12 July. Mary would love for there to be an interpreter in the parish. This is hard work as the interpreter needs to find the right way of expressing the priest’s words and this requires quick thinking. Signing the Gospel and the words of hymns is beautiful.

Mary likes her computer as Facebook and Skype (using signing)  enables her to keep in touch with her family and friends both in New Zealand and overseas.  She enjoys watching TV and movies and she really enjoys cooking, although she jokes that she is “not up to Masterchef standard!” She loves reading, going for a drive and helping deaf people by communicating for them.  Mary used to love gardening but due to a knee injury sustained while visiting her sister in Christchurch during the earthquake three years ago is no longer able to do it.

Mary believes that her vocation in life has been to teach and help the deaf community rather than marrying and having a family.  She is very grateful to the Dominican Sisters and her education under their care.  She still maintains friendships with her classmates with whom she was so happy.

The first school for the deaf in the world to be fully Government funded opened in 1880 in Sumner, Christchurch. From that time until the early 1940’s Sumner was the only State-run school for deaf children  in New Zealand. During World War II the school was required for army training accommodation and most students were relocated to Lopdell House in Titirangi.  In 1943, when the army moved out, some of the children returned to Sumner. Due to several Rubella and Polio epidemics in the 1930’s and 1940’s the number of children born deaf had increased. The St Dominic’s school for the deaf was established in 1944, joining two other schools for the deaf – in Titirangi and Sumner. Due to falling numbers St Dominic’s closed in May 1989. Today the Kelston School for the deaf only has boarders for four days a week so children can maintain more contact with their families.  Children are deaf today mainly because of birth difficulties causing lack of oxygen, congenital deafness or multi-handicapped disabilities. Fortunately immunisation has prevented the Polio and German Measles epidemics of the past from reoccurring.

For further information, read “We see what You mean… A History of St Dominic’s School for Deaf Children and the Catholic Deaf Ministry in New Zealand”  by Dorothy Pilkington, published in 2008. Please contact Paula on 021321988 if you would like to borrow a copy of this most interesting book.

Thanks to Paula Scandle for giving us permission to share this article.

by Rhobust | Comments Off on Mary Johnson