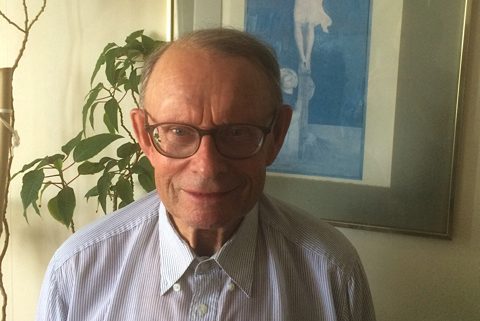 Many congregations of sisters had a hand in Joe’s primary schooling: the Josephites in Paeroa, the Religious of the Sacred Heart in Island Bay, Wellington and the Dominicans in North East Valley, Dunedin. It was in the Valley, too, that Joe first met the friars. They arrived in 1949 taking over the NEV parish.

Joe remembers the pioneer friars Fr McArdle and Father Crowley well, first in Dunedin and then in Lower Hutt. Fr McArdle, when lobbying the government to provide a one-for-one subsidy in the building of Aquinas Hall, came visiting in Lower Hutt. Fr Crowley also came and stayed with the family for a few days when on holiday. Solid contacts and his beginnings with the Order!

Joe could have entered the Dominicans after he obtained his 1953 University Entrance, but his father counselled him to wait at least a year. Therefore he finished his seventh form year at St. Patrick’s College, Cambridge Terrace, having studied Latin again, before entering the Order in 1955. This year, 2016, is the diamond jubilee of his first profession, along with four Australians. Two of them, Bernie Maxwell and David Halstead, are well known in Aotearoa. Congratulations, Joe.

Following the custom of the Province, Joe’s first work post-ordination was to teach students at Blackfriars Priory School, in Adelaide. He did this for four years from 1964-67. After that he was transferred to Blockhouse Bay parish, Auckland, where he worked with Father Raymond George for five years, before pastoring with Father Stan Foley in the North East valley parish until 1977. That year he began work at the Auckland General Hospital as chaplain. With some breaks for renewal courses and adjusting to structural shifts within the hospital, Joe spent the next 39 years at this ministry, the work of a lifetime. For this alone, we honour Joe. It is an amazing feat. As an addendum to this, while maintaining this chaplaincy work, Joe was able to study and gain a Bachelor of Arts degree at Auckland University over a ten year period from 1984-94. He enjoyed studying New Zealand history, having his horizons expanded through such gifted teachers as Ann Salmond and Claudia Orange.

For most of the time since 1977, Joe has had the additional task of being bursar of the Auckland community – at St. Ben’s first, and now at Emily Place. He enjoys this methodical work. He does this easily, he says, without use of a computer!

Joe remembers three periods of supply work with great affection (at Inverell, in northern NSW, for three months; at Balmoral parish recently; and at Thames-Ngatea). Working for the Thames–Ngatea parish meant driving down from Auckland each weekend to celebrate their Sunday Eucharist. He did this over a period of five years from 1995-99 getting to know this rural community well.

Officially now “in retirement” and with excellent health, Joe helps with celebrating weekday morning Masses at St. Benedicts Newton, and with the Baradene Sisters and at Mercy Parklands hospital. It is a more leisurely life, but one he enjoys.

by Teresa | Comments Off on Fr Joseph Parkinson OP