Caring for our Common Home – focus on Oceania 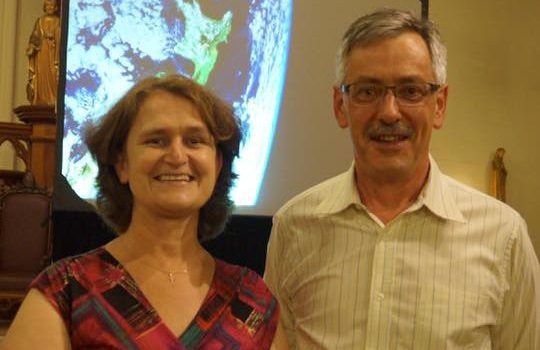 On 17 February in the first of four lectures Julianne Hickey Director of Caritas Aotearoa New Zealand (and member of the Dominican Family) and Rod Oram, Business Analyst focused on Oceania and the issues that threaten our environment.   Below are just a few comments that spoke to some of us gathered for the lecture.

Julianne drew attention to the 1700 people who call The Carteret Islands home.  These are six islands which are, literally, sinking.  Children living on The Carteret Islands are hungry as the food supply has gone.   Elderly people do want to live – these islands are their home and they can’t imagine moving.   Younger residents are already relocating to Bougainville who have made a block of land available however the cultural traditions of the people of The Carteret Islands revolve around sago plants that grow on their atoll.  Not only do these people need to relocate, they need to develop new skills and let go of many of their cultural practices as they cannot grow sago in Bougainville.   Over one hundred billion dollars is needed each year to help the people of the Carteret Island and many others who will face the same challenges in the future.   The challenge is that the money that is available for relocation due to climate change is not reaching the communities that really need it.

Continuing on Julianne spoke about how the Jubilee Year of Mercy takes on a new and urgent meaning when you consider how the earth needs to rest and rejuvenate.  We need to be content with what the earth itself produces and only take what we really need.   You might take time to contemplate how to live out the spiritual and corporal works of mercy when we consider such challenges as water shortages, the many who will need to relocate in coming years due to climate change and how we might reach out to welcome refugees.   We can each play our part in being the solution.  Pope Francis encourages us to undertake this work with optimism and urgency.  He asks us to sing as we go – so let’s stay positive and take action today in small ways such as reusing instead of throwing away.

Rod Oram asked the question “What can we as Catholic and Anglicans bring?”  As people of faith we have an understanding of God, of gift and of relationship.   We need to restore our relations with each other and between humanity and the planet.  We need to work with nature – not against it.

Rod encouraged us to consider what the priorities are when it comes to climate finance.   Building on what Julianne had mentioned earlier he argued that the order of priority should be (1) resettlement of people who have to move (2) food for all and (3) how do deal with the abundance of water.   He asked the question whether those living on islands now submerged should be granted refugee status.   Currently they aren’t regarded as refugees but surely they are entitled to be able to migrate with dignity?

On a global level we hear that there is commitment and money from developed countries to assist people who need to migrate due to climate change.  The agreement in Paris was a small step but the funding available is still too small and the voices of people struggling on small Pacific islands is not being heard.   One of the comments that I found really interesting was that we need to change some of the terminology we use.  Rather than saying that a group of islands such as The Carteret Islands is a “small island state” lets instead say that they are a “large ocean state”.   We must ask not only what we as individuals are doing but also what we as the country of Aotearoa New Zealand are doing.   Individually there are many trying to do their bit and nationally New Zealand is doing some good work supporting the aid programmes of others but are we meeting what we have committed to as a global citizen?