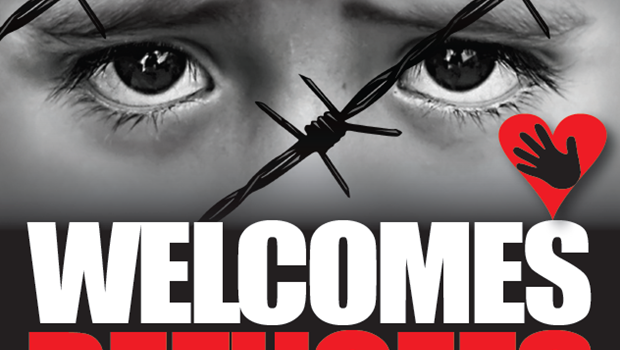 (from The Lightless Sky- An Afghan Refugee Boy’s Journey of Escape to a New Life, Gulawi Passarlay with Nadene Ghouri).

These are the words of Gulawi Passarlay who was only 12 years old when, at his mother’s instigation, he fled Afghanistan after the massacre of his father and grandfather and started on the long refugee journey to England.  A journey that he nearly didn’t survive, a journey that robbed him of his childhood and left him devastated and despairing.  Yet, as Gulawi says, his story is also about faith, hope and optimism and being there for each other.

Dunedin seems so far away from the horror that so many refugees face every day but we also know that we can make a difference, even if it is only a small difference.  In June last year, Fr Gerard Aynsley organised a meeting to consider how Dunedin people could respond to the plight of refugees and following that meeting we decided to investigate ways in which Dunedin could host refugees, as the city had done previously.

From that small beginning we reached out to other Dunedin groups and discovered a wealth of experienced people working with former refugees and migrants.  Together we formed the Dunedin Refugee Steering Group, which grew rapidly as new groups and individuals from varied backgrounds, all keen to welcome refugees to Dunedin, joined the group. Confident of community support, including that of Mayor Dave Cull and the Dunedin City Council, we asked the Government to consider Dunedin as the site for a new refugee relocation centre and we were thrilled when the Government announced, in November, that Dunedin would become a refugee relocation centre with the first group of refugees arriving in late April 2016.

What has been amazing is the enthusiasm and spirit of goodwill, kindness and generosity that has been evident from the Dunedin community from the very start of this process.  (God’s Spirit I’m sure!).  People from so many different backgrounds and nationalities, secular groups and people of different faiths working together for a common purpose.  Fr Gerard, who is the Chairperson of this expanding group, always starts each meeting with a time of silent reflection- a powerful moment of both interfaith prayer and goodwill from those of non-faith backgrounds.

While we are conscious that it is because of the horror of war and violence that our city is working together to bring refugees to Dunedin and while we cannot begin to imagine the trauma and devastation that refugees have faced, being forced to flee from their homeland, we are hopeful that the love and concern of our welcoming city will help ease their pain and suffering.  In turn, we know that our community will be enriched by the presence of refugees from diverse culture and faith backgrounds who will be making a new life for themselves and their families in Dunedin.

As Mother Teresa noted – If we have no peace, it is because we have forgotten that we belong to each other.

by Teresa | Comments Off on Dunedin welcomes refugees