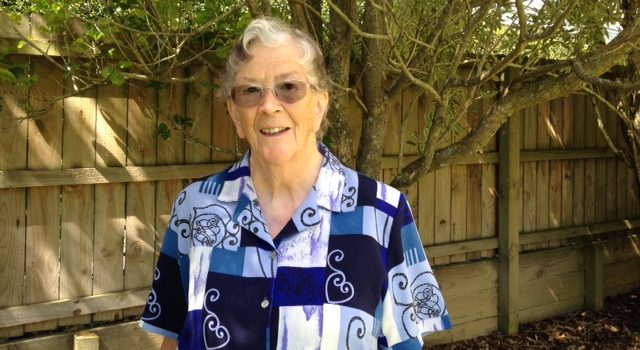 In 2009 I began to work with refugees as a volunteer. First there was a training course. I thought most volunteers would be retired, but four of us were senior citizens, and the other twenty-three were young adults wanting to give something back to others less fortunate than themselves.

I was in admiration of them and they made me proud to be a New Zealander. Refugees to NZ have six weeks at the Mangere Refugee Centre,
and then teams of volunteers help them settle. Volunteers find them basic furniture and household goods, but many organisations assist. I got to know second hand shops well, enrolled adults in English classes, children in schools and helped acquire uniforms and stationery. The refugees are relieved to be safe, and are grateful to be here, but adapting to life in New Zealand is still very difficult.

Each family I worked with needed advocacy with government departments and health care professionals, help with initial power and telephone connections, buying food, paying accounts, coping with a bank and an ATM, and managing the transport system. We do so many things differently. Some had never used a washing machine or stove; few were used to our toilets; many had not worn shoes before; had never seen an elevator; and had no idea how to use a lift. To begin with, most needed help almost daily. The first two years are the hardest, but there are many reasons why settling here can be difficult: marriages can be in serious difficulties with husband and wife having been in different camps for years; some of the young people have escaped from kidnappers and have suffered all sorts of abuse.

There are social workers and cross cultural workers to help with situations like these. We had to help them become independent as soon as possible. The second time I went with an older lady to the supermarket, I kept in the background in the hope she could manage
herself.  She spent a lot of time in the bread aisle, which I found odd because she ate rice and noodles. When we got home, she handed me a loaf of bread, “For you.” She had had twenty years in a refugee camp, had almost nothing, but wanted to thank me. I was awestruck.

Our current refugees have lost their country, family and friends and much of their own way of doing things. They must learn English, which is hard enough for those who are literate in their own language, but really difficult for those who have never learnt to read or write. Inevitably, they are already contributing to our society in small ways. One of “my” refugees lived in a complex of eight units. It was impressive to see Filipinos, Burmese, Mandarin and Cantonese speaking Chinese, and Indians taking for granted that people of other ethnicities have equal human dignity and that their different attitudes should be respected. They organized themselves into a residents’ society and arranged things like sharing rubbish and recycling bins
instead of having eight of all these outside their building at the same time. Once a bin was full, it was put onto the kerb for collection and another one was used.

Let’s hope we can continue to be open to all these different cultures and values. If we can do this, we will be allowing ourselves to be enriched immeasurably.

by Teresa | Comments Off on Working with refugees