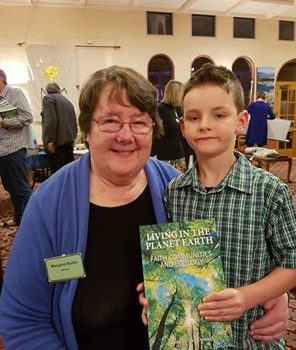 Margaret Butler OP shares this introduction to a chapter she has contributed to Living in the Planet Earth, Faith Communities and Ecology, edited by Neil Darragh and available at Accent Publications, www.accentpublications.co.nz.

At the New Zealand Dominican Sisters’ Eleventh General Chapter in 1990 there was a strong call for the Sisters to stand for justice. In their Mission Statement the Sisters declared, ‘The Congregation makes a deliberate choice to stand with the poor and oppressed and to work for justice.’ At that time the Congregation was joining the discussion in New Zealand concerning the importance of the Treaty of Waitangi and the changes in attitude and practice that were being called for. It was a challenging time that has borne much fruit.

At the same time the importance of care for the earth was also being discussed. Some of the Sisters, especially Cecily Sheehy, were encouraging us to look more carefully at the earth we inhabit and often abuse. The Chapter called us to clarify the justice links between respect for the environment and the mission statement. Both movements, caring for the earth and working for social justice, were necessary and challenging.

We had been reminded at the Chapter that we were “facing the same problems as other groups in society”. As we faced the problems of society we learned to work with other groups and not just for them. In our educational tradition we knew that “learning with”  has its own generative power. Being part of groups involved in all aspects of justice reinforced in us the knowledge that alone we do not have all the answers and that a journey with others is richer than a solitary one.

Towards the end of the 1990’s a dream began to emerge in Southland, New Zealand: the possibility of developing a centre for exploring  ways to care for the earth, to draw together people with similar dreams and to provide an oasis for people looking for a reflective haven.

Over the next few years the dream has materialised with many people being touched, challenged and transformed.  This chapter will describe the process towards fulfilling the dream through the gradual establishment of an ecumenical venture, Korimako Dominican Ecology Centre. It will note the change in its purpose to reflect the interconnectedness of everything as well as describe the colourful patchwork of visitors. Finally it will consider several questions which life at Korimako Dominican Ecology Centre raises.

The rest of this chapter is in Living in the Planet Earth, Faith Communities and Ecology, edited by Neil Darragh and available at Accent Publications, www.accentpublications.co.nz.

Photo:
Margaret Butler OP with her great-nephew, Hamish McPhail at the Wellington launch of  Living in the Planet Earth.

by Rhobust | Comments Off on New book launched