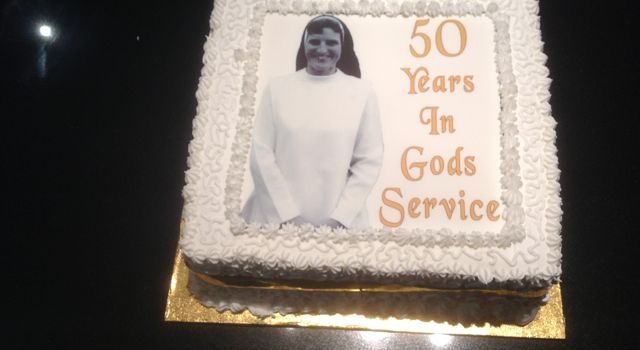 My Golden Jubilee was celebrated on May 18, ( the actual anniversary of taking my vows) at the Maori Catholic Marae, Te Tomairangi. Thirty Five people attended, 14 Dominican Sisters, Father Kevin Toomey op, six Dominican Family, members of my family, and marae members who prepared the meal.

I chose the marae because I have been part of that whanau since its inception. We were called on to the marae which was followed by a powhiri. We then gathered on the veranda where each person took a native twig from a basket and we sang as we processed along the veranda to the grounds where we formed a V shape around the statue of Mary in the corner of the grounds. She symbolized that maternal care of our earth home and the liturgy was based on this theme of interconnectedness and right relationship, recognizing the Divine in and care of all living beings. The liturgy concluded with all holding hands with their green twig held aloft for several minutes stillness reflecting on the Our Father phrase..your will be done on earth as it is in heaven. We then sang the OUR FATHER.

A delicious meal was then enjoyed by all in the Whare Kai. It was a graced golden day which I was so grateful to share with so many of my Dominican, human and marae families. My grateful and prayerful thanks to all.

Photos of Sr Judith Robinson’s Jubilee can be found by going to About Us on the Menu and choosing Photo Gallery.