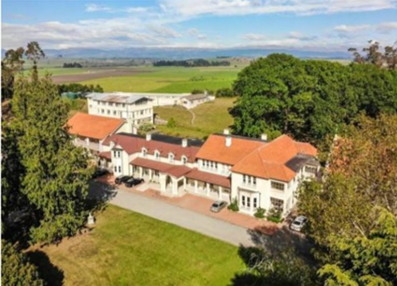 Teschemakers Resort that is now operating as accommodation, a wedding venue and conference centre, has been sold.  The new owners of Teschemakers Resort believe it has “great potential” to become a top-rated destination in New Zealand.  More details from a recent article…

The former Catholic girls’ boarding school-turned accommodation, wedding venue and conference centre, south of Oamaru, was listed for sale by Bayleys Metro Dunedin in November.  This month, real estate agent Robin Hyndman confirmed the property had been bought by Auckland couple Vincent Teoh and Renee Chong.  In a joint statement to the Otago Daily Times, Mr Teoh and Ms Chong said they were “excited” to take over the property in April.

“When we first saw Teschemakers, we were impressed with its significant historical aspect, grandeur and tranquillity,” they said.

They would work closely with the local community to preserve Teschemakers’ beauty and make it “an important, thriving landmark in Oamaru”.  “We look forward to collaborating with the community and we are open to suggestions and ideas on how Teschemakers could complement other attractions and hospitality venues in Oamaru.”  They would continue to operate it as an accommodation venue for international and domestic tourists, and market it as a wedding and event venue for locals.

“At the same time, there is still lots of building infrastructure to support successful operations as a large function centre, perhaps even [an] overseas meetings venue for corporate or school groups visiting New Zealand.”

While Mr Teoh and Ms Chong would not disclose the sale price they said “the vendor is happy with the price that we offered him”. Teschemakers has a capital value of $3.5million.

Originally part of the Taipo Estate, the Teschemakers property was bought by William Teschemaker, one of North Otago’s early runholders, in 1860. It was sold to John McCarthy in 1905, and the homestead and some land was later gifted to the Dominican Sisters for the purposes of establishing a girls’ boarding school.

St Patrick’s School opened in 1912, with boarding facilities, a swimming pool, tennis courts, orchards and a chapel. It closed in 1977, and later became a conference and retreat centre.

In 2000, it was sold to a Japanese businessman, the late Dr Hirotomi Ochi, who planned to turn the school into an international health sciences centre. However, three years later a fire destroyed the original homestead and convent, which were rebuilt as residential accommodation, with meeting rooms and a full commercial kitchen. Dr Ochi died in 2005, shortly before the refurbishment was complete.  The property was then bought by a North Otago couple who established a wedding and conference venue.

Penguin Pacific bought the property in 2017, and it was incorporated into director Sean Zhang’s international tour bus operation Reach Coach, then choosing the title Teschemakers Resort.