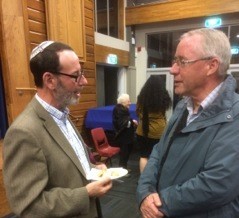 On Sept. 29 over 200 people gathered at St Peter’s College to hear a presentation by Rabbi Fred Morgan, a guest of the NZ Catholic Bishops’ Committee for Interfaith Relations.  Rabbi Morgan is Rabbi Emeritus of Temple Beth Israel in Melbourne where he served for many years, and currently serves as Professorial Fellow at the Australian Catholic University in the area of Jewish-Christian relations.

His talk was in honour of 50 years since the document “Nostra Aetate” (In Our Time) was produced by the Second Vatican Council. This document opened the door to new possibilities for Jewish/Catholic relations, and redefined the Catholic Church’s approach to inter-religious dialogue. He explained how 14 sentences in the document revolutionised almost 2000 years of barriers to dialogue between Jews and Catholics.

Rabbi Morgan gave some background as to how the document was created, and explained the important role of Rabbi Abraham Joshua Heschel in dialoguing with Pope Paul VI to help clarify the Jewish position on various topics. The final document revealed what Rabbi Morgan summarised as four significant shifts in the Catholic view of Judaism:

Rabbi Morgan explained that the document was not universally appreciated by the Jewish community, as it avoided certain issues that are close to the heart of all Jews – namely the Holocaust, and the significance of the State of Israel.  He noted that subsequently there have been other, more recent documents produced by the Church that do address some of these issues, e.g. the 1998 “We Remember – A Reflection on the Shoah “(Holocaust).

The Rabbi explained that acknowledging that Jesus was a Jew has led some Catholics to study Old Testament Judaism in order to better understand Jesus. However Modern Judaism does not base its practice on the Old Testament. For example, sacrifice has long been replaced by prayer. Following the destruction of the Temple in Jerusalem in 70 a.d., Judaism developed into what is called Rabbinic Judaism, based on the Torah (five Books of Moses in the Old Testament) and the Talmud, Rabbinic writings that interpret the Torah. In that sense, modern Judaism and modern Christianity developed somewhat concurrently, within the Roman Empire. Viewing the two faiths as ‘spiritual siblings’ creates more symmetry in the relationship.

A group of 200 Jewish scholars and rabbis formulated a statement about Christian/Jewish relations in the year 2000 entitled “Dabru Emet” (Hebrew for ‘Speak Truth’) which Rabbi Morgan summarised thus:

In conclusion, the Rabbi’s talk was very informative and enlightening, based on insights from his decades of study and interfaith work. He is currently involved in a grassroots interfaith dialogue project in Melbourne, in which pairs of speakers – 1 Jewish, 1 Christian, make presentations at various faith communities during their usual worship services. The goal is, in his words: “Learning to listen to the ‘religious other’, without proselytizing, and without apology.”

The programme concluded with salient remarks from Father Neil Darrah, in which he emphacised that dialogue is the key, and reminded us that diversity exists within faiths as well as between them. He outlined some of the challenges faced by the Catholic Church re. Nostra Aetate, particularly from Arab states which had relations with the Vatican. Those states viewed any support for Jews to be synonymous with support for Israel. He mentioned that the guidelines issued for implementing Nostra Aetate were much longer than the statement itself.

The evening ended with supper and a chance for attendees to speak among themselves and with the various speakers.

Disclaimer – This report is based on my notes. I am no scholar so I do apologise for any mistakes or inaccuracies.

For further information, check out these websites:

Thanks to Ruth Cleaver’s for her summary of Rabbi Fred’s talk in Auckland.
Photo: Shows Rabbi Fred with Fr John Dunn.