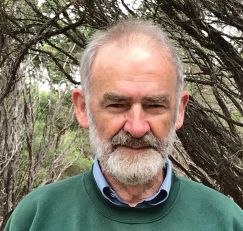 Peter Murnane is a Dominican Friar who was in Auckland from ’91 to 2011, then in the Solomon Islands for four years. Back in Melbourne after some medical adventures, he has been writing this blog since mid-2016.   His Easter blog post is shared below: As we move through life, we often find that we have to change our minds about some important matters. This is an important part of growing up, of growing wiser as we learn from other people. I recently came across a good example of this. We often read or hear in the news how bad people are. Talk-back radio gurus love to give us examples of this. The famous book Lord of the Flies tried to show us that children left to themselves on an island without adult control would begin to fight and destroy each other. Many people believe that our natural state is fighting each other, a state of continuous war. But the thoughtful book Human kind challenges this idea. It shows how good most people are. It begins by showing that Lord of the Flies got it wrong, by telling the tru e story of six boys who actually were marooned on an uninhabited Pacific island for fifteen months. They did not destroy each other, but learned to live in peace together, growing food, overcoming their quarrels and caring for each other. Many other true stories in this book Human kind show how it is in our nature to help and care for other people. Just look at how people help each other when struggling against bushfires or floods! The book gives many examples of how journalists and the media often distort a story to make people seem cruel, inhuman, when they are mostly the opposite. The media bosses know that sensational stories sell better. If we think that most people are naturally bad, perhaps we need to change our minds. Easter
Read More

Does everything seem to be falling apart – from Peter Murnane’s blog: If it seems that w...