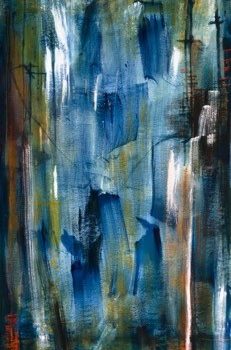 In 2014 Mary Horn was asked to do a evocative image of the Life of Sigrid Undset.  Sigrid is a lay Dominican from Norway who won the Nobel Prize for literature in 1928.  She spoke out about Hitler and had to flee her native land with the German invasion. A wonderfully inspiring woman you will find her on the internet.
The image will be one of 16 that will be translated onto banners to be hung in Santa Sabina Basilica Rome at the end of 2016. Two Dominicans from each century have been chosen and 16 Dominican Artists from throughout the world asked to do the works for display.
It is the abstract image that will go up in Santa Sabina. The drawing Mary used to get her started is also shown.
by Teresa | Comments Off on NZ artist’s work to be hung at Santa Sabina in Rome