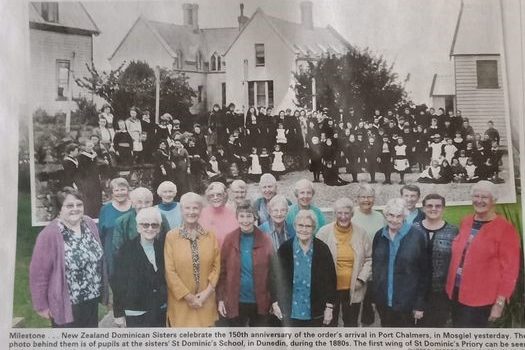 We give thanks for our Dominican Sisters and their ministry.  We give thanks for their willingness to share this homily which was given at St Mary’s Church, Mosgiel on Saturday 27 March, 2021 by Sandra Winton OP. ‘He stood up to read, and the scroll of the prophet Isaiah was given to him. He unrolled the scroll and found the place.…’ Jesus is sitting among the congregation in the synagogue of Nazareth. He rises to his feet and the synagogue attendant carries over to him the double roll of the book of the prophecy of Isaiah. It is laid flat in front of him and he takes the two handles and rolls it, probably from left to right, until he finds the place that he is seeking, a text hundreds of years old. He reads the words of the ancient prophet, words that speak of an anointing by the Spirit of God and a being sent by that same Spirit, to the poor, the captives, the blind, the oppressed. He reads of ‘the year of God’s favour’. Then he rolls up the scroll and hands it back to the attendant. He does not proceed to offer an explanation of these sacred words from history. The ancient text has spoken to him and now it is laid aside. There is only himself. ‘Today this scripture has been fulfilled in your hearing.’ Jesus is not revealing his plan, his programme, his targets. Rather he lays open his own self, the deepest calling
Read More